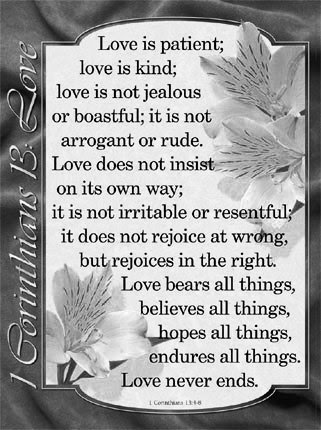 Sad to say, most Christians read a great passage like “The Love Chapter” as if it stands alone, oblivious to the fact that Paul wrote a letter not chapters. First Corinthians, like the rest of the New Testament, stood without chapter divisions for over a millennium….

the letter is to do violence to God’s word. This clouds our

understanding because it betrays the context. Regarding rules for

study, Haddon Robinson on Radio Bible Class is fond of quoting one of

his seminary colleagues: “Context is king.”

So, let us look at the context of love in First Corinthians.

of parading itself, not puffed up. Being puffed up described

the Corinthians themselves (5:4). This attitude allowed them

to overlook sexual immorality in their midst. Paul tells them

that not only are they proud, but they have not “mourned”

When we hear those ringing words, “love . . . does not

rejoice in iniquity, but rejoices in the truth” (13:6, italics

added), we should recall the Corinthians’ sinful condition in

chapter 5—their disobedience, displayed by their toleration of

of Christian discipline so that they can celebrate Christ’s

sacrifice for sins “with the unleavened bread of sincerity and

truth” (5:8, italics added). The concern expressed in the first

citation (13:6), taken in the context of the letter, should draw

our minds back to the problem confronted in the second citation

(5:8). Note the concern for truth in both passages.

Today, it would be a safe assumption to say that the

majority of Christians, including leaders, turn this Scripture

Scriptural commands regarding rebuke and discipline which

are to be implemented in the face of disobedience. Again, this

false premise results when we resist holding together those

things which the holy conjunction gives us, things like love

his word, which both declares “love is patient and kind” and

commands “remove the evil man from among you,” all in

the same letter. When Paul gave the Corinthians that command,

that “all the people shall hear and fear, and not act presumptuously

are those who continue in their willful defiance of his commands, for

the sake of the health of his bride, his people, he will not tolerate it.

Earlier, Paul had asked the Corinthians, “Do you (plural)

not know that you (the congregation) are the temple of God

and that the Spirit of God dwells in you (pl.)? If anyone

defiles the temple (the congregation) of God, God will

destroy him. For the temple (congregation) of God is holy,

God’s concern here is for the health of his Body, his

church (assembly) in Corinth. Love and obedience are the

keys to this congregation’s well being.

Today, this concern is lost among many evangelical

Christians. We so emphasize personal salvation that we

diminish Christ’s concern for his Body, his assembly of

believers wherever it may meet. To use a phrase of Elton

Trueblood’s, we make small what Christ made large. Why?

Again, we dispense with the holy conjunction, “and”—this

to our detriment. If we are to be whole and holy, we must

remedy our neglect. Otherwise, we will never get out of one

Too often, as American Christians, we have fallen for this

potential heresy. But as one Christian radio commentary put

it, “The spirit of individualism is one of the false gods of our

modern age . . . it presumes the individual person is the final

authority in his or her own life.”

…This individualistic spirit is not new. Paul exhorted the

of herself).” He also wrote this as a direct command: “Let no

the wrong attitude which stemmed directly from the

displayed this attitude with their slogan, “All things are lawful

The Apostle exhorted the Corinthians to replace their

self-centered focus with a God-centered one. “Flee sexual

immorality . . . you were bought at a price; therefore glorify

love of neighbor: “Let no one seek his own, but each one the other’s

to law against brother, and that before unbelievers”(6:5,6).

Just as Paul could not, Christians who love cannot

remain silent when face to face with fellow believers who

are departing from the narrow way. Though Scripture mandates

that we speak up, this imperative sounds off-key to

generations that have allowed the faceless Zeitgeist to

It is not that Earthly Wisdom sings about love in, let’s

say, the key of E, while the Word of God sings about love in,

say, the key of G. This analogy will not work. Rather, we

hear two very different songs; while some of the words do

overlap, the dissimilar tunes ring out with a horrible clash

(that is, if God’s people are singing their song, because the

those of the world are certainly singing theirs).

The key question for us, as Christians, is, “Why are we

deaf to this dissonance?” Well, there is a breeze blowing in

our ears. The prevailing winds lull us to sleep as context is

Be a disciple. Learn, grow, and be a faithful witness–This post excerpted from Love, Prayer, and Forgiveness: When Basics Become Heresies