In the beginning, God…

Usually, even a non-Christian knows something about the earth, the heavens, and the other elements of this world, about the motion and orbit of the stars and even their size and relative positions, about the predictable eclipses of the sun and moon, the cycles of the years and the seasons, . . . and this knowledge he holds to as being certain from reason and experience.

Now, it is a disgraceful and dangerous thing for an infidel to hear a Christian, presumably giving the meaning of Holy Scripture, talking nonsense on these topics; and we should take all means to prevent such an embarrassing situation, in which people show up vast ignorance in a Christian and laugh it to scorn. The shame is not so much that an ignorant individual is derided, but that people outside the household of faith think our sacred writers held such opinions, and, to the great loss of those for whose salvation we toil, the writers of our Scripture are criticized and rejected as unlearned men.

If they find a Christian mistaken in a field which they themselves know well and hear him maintaining his foolish opinions about our books, how are they going to believe those books in matters concerning the resurrection of the dead, the hope of eternal life, and the kingdom of heaven, when they think their pages are full of falsehoods on facts which they themselves have learned from experience and the light of reason?

Reckless and incompetent expounders of Holy Scripture bring untold trouble and sorrow on their wiser brethren when they are caught in one of their mischievous false opinions and are taken to task by those who are not bound by the authority of our sacred books. For then, to defend their utterly foolish and obviously untrue statements, they will try to call upon Holy Scripture for proof and even recite from memory many passages which they think support their position, although “they understand neither what they say nor the things about which they make assertions” [1 Timothy 1:7]. (All emphases, mine)

John Calvin, in the 16th Century, made many wise comments on Genesis:

“He who would learn astronomy…let him go elsewhere….”

”Moses wrote in a popular style things which without instruction, all ordinary persons, endued with common sense, are able to understand; but astronomers investigate with great labor whatever the sagacity of the human mind can comprehend. Nevertheless, this study is not to be reprobated, nor this science to be condemned, because some frantic persons are wont boldly to reject whatever is unknown to them. For astronomy is not only pleasant, but also very useful to be known: it cannot be denied that this art unfolds the admirable wisdom of God.”

See, also, In The Beginning 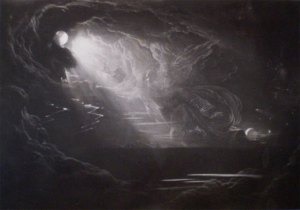 In the beginning, God created the heavens and the earth.

When thinking about creation, Christians often turn to geologists and astronomers and even high school science teachers as they seek understanding. And though there is much to learn, there is much that leads astray. But for all the claims about the authority of Scripture, who ever begins there? Instead of beginning with science, read first about Scripture. Read commentaries.

“In the beginning, God created the heavens and the earth. And the earth was without form and void and darkness covered the face of the deep…”

How much time elapsed in the age of the earth between the creation of the universe in verse 1 and “Let there be light” in verse 3? We have no clue in Scripture. [But many Christians, unfamiliar with this Scripture, seem to wrongly assume that  “the beginning” (verse 1) equals “let there be light.” (verse 3)]

Gen 1:1 is not a preface, it is an absolute statement (G. Ch. Aalders: “this is the rendition that is found in every ancient translation, without exception”); “heavens and earth” is a merism, a figure of speech that signifies the whole, i.e. “the universe.”

Verse 2 tells us about the state of the earth following God’s act of creation in verse 1. Calvin, long before the evolution debate, wrote, “before God had perfected the world it was an undigested mass…this mass, however confused it might be, was rendered stable, for the time, by the secret efficacy of the Spirit.” [Whatever the cosmology of Calvin’s day, he saw an earth in verse two that would need further work in verses 3 and following, thus an elapse of unknown time. You can read Calvin’s  commentaries, free, online.]

NICOT: [Genesis, The New International Commentary on the Old Testament, Eerdmans, 1990] “Verse 2 then, describes the situation prior to the detailed creation that is spelled out in vv 3ff” [underline mine]. How much time elapsed before verse 3, “Let there be light”? Scripture is silent.

But time compression, in describing events, occurs regularly in Scripture. In Genesis 4, we leap from the conception of Cain in verse one, to the birth of Abel in verse two, and with Abel now being a shepherd in that same verse.

Anyone who reads the Old Testament will see these leaps of time again and again.

The Earth–“Let there be light…”

Three conditions of the earth are described in v.2, the last being ‘darkness’ for which God provides the remedy in v. 3, “Let there be light…”

And in the following verses he provides the remedies for the other two conditions.

There is a wonderful symmetry here: Days one to three have been called, “Days of Preparation” and the last three, “Days of Filling” or from the general to the particular . e.g. day one has ‘light’ ; day four has lights (sun/moon/stars) set in order. Day two has sky and day five has birds of the sky, etc.

In these verses “heaven” and “earth” are used in a limited sense. “The dry land he called earth” [not the planet]. The heavens, here, as the NIV translates it, is our “sky.”

Day One and the days that follow are the week in which God sets his creation in order for the creation of man.

“For in six days the LORD made the heavens and the earth, the sea, and all that is in them, but he rested on the seventh day” Exodus 20:11.

This verse is often wrongly used. [See, here] Here, speaking of that week, “the LORD made” not created as in Gen. 1:1. “Made” can have the same connotation as our “making” our bed. We set in order what is already there. [In this case, the remedy for the messy conditions described in verse 2.]

Thus, this verse [Exodus 20:11] is parallel with what we read of the “days” of the week as described: …heavens, earth, sea, and all that is in them [the exact things named in the days of the week], NOT with the universe, the “heavens and earth,” of Genesis 1:1 [It does not reflect on the creation of the universe but on preparing “earth” for man; setting in order the earth that is dark and empty].

A completely unnecessary conflict among some Christians concerns the notion of a Scriptural age of the earth. The ability of devout Christians to fool themselves about their own knowledge is seen in the 17th Century scholars, Bishop Usher and John Lightfoot of Cambridge. The presumptions and false premises of devout and diligent Christians led to setting a date for the creation of the universe. Lightfoot’s first assessment was September 17, 3928 B.C. [What was happening on September 16th?!] Of course, as the first two verses of Genesis show, genealogies [which have their own problems of understanding] do not have anything to do with the age of the earth.

John Calvin, in the 16th Century, made many wise comments on Genesis: “He who would learn astronomy…let him go elsewhere….”

”Moses wrote in a popular style things which without instruction, all ordinary persons, endued with common sense, are able to understand; but astronomers investigate with great labor whatever the sagacity of the human mind can comprehend. Nevertheless, this study is not to be reprobated, nor this science to be condemned, because some frantic persons are wont boldly to reject whatever is unknown to them. For astronomy is not only pleasant, but also very useful to be known: it cannot be denied that this art unfolds the admirable wisdom of God.”

On the relationship of natural and special revelation see R.C. Sproul, Youtube (Link) and Augustine, Commentary on Genesis