A brief look at Romans “13” in its historical and textual context:

After the Babylonian captivity ended, Judea survived under the succeeding Empires.

323 BC Death of Alexander the Great. Kingdom divided among the generals.

Judea comes under the Ptolemies, who also rule Eygpt

198 BC Judea annexed by the Seleucids, under Antiochus III, who rules Syria

During this period, Jews were under no government edicts to change customs [though many fell under the spell of the Hellenistic spirit of the times]. Antiochus strengthened the High Priesthood, made Torah official law for Jews and exempted Jews from taxes.

Judea was still a theocratic/Temple State.

Internal strife precipitated a crisis under the next king, Antiochus IV, Epiphanes. High Priestly faction, the House of Zaddock, was pro-Ptolemaic.

Complaints against High Priest Onias III led to removal. Office was sold to his brother, Jason, who received permission from Antiochus “to transform Jerusalem into a Greek polis…” “For the first time in Jewish History, the office of high priest had changed from heritage to a privileged position…” to be bought.

Later, Jason refused to surrender that office. Civil war broke out. Besides the political factions, the scribal class, to whom the common people looked, produced the Hassidim who attacked Jews who were Hellenizers.

This led to the events described in Maccabees: Desecration of the Temple; the Abomination of Desolation.

This then led to Revolt of the Maccabees, joined by the Hassidim

164 BC “On December 25…Temple was purified and rededicated to Yahweh.”

Intervening Years till reign of Herod–Battles continue between factions and enemies.

40 BC After Rome’s Civil War, under Octavian Caesar, Antony and Roman Senate confer title on Herod: “King of the Jews” [despised by devout Jews]

4 BC Death of Herod The Great

Change in government calls for census—taken for purpose of taxation. To devout Jews, this was a symbol of subjugation to Rome, a foreign, pagan power

Judas the Galilean [Acts 5:37], with Zadock the Pharisee, leads Revolt

Judas recruits his band around Sepphoris, the capitol [a short distance from Nazareth]

Three Roman Legions under Varus crush revolt via the sword.

[From this period until the outbreak of the final Jewish War in AD 66, Zealots and assassins would continue to foment rebellion and violent outbreaks. Josephus, The Jewish War, is great background reading for understanding NT times.] 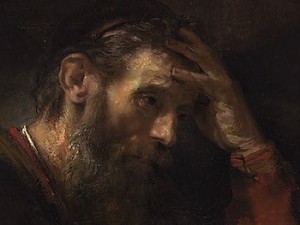 [Note: Paul wrote a letter, not chapters.  New Testament Had NO Chapter numbers for over 1000 years.]

I appeal to you therefore, brothers, by the mercies of God, to present your bodies as a living sacrifice, holy and acceptable to God, which is your spiritual worship. Do not be conformed to this world, but be transformed by the renewal of your mind, that by testing you may discern what is the will of God, what is good and acceptable and perfect…

Bless those who persecute you; bless and do not curse. Rejoice with those who rejoice; mourn with those who mourn. Live in harmony with one another. Do not be proud, but be willing to associate with people of low position. Do not be conceited. Do not repay anyone evil for evil. Be careful to do what is right in the eyes of everybody. If it is possible, as far as it depends on you, live at peace with everyone. Do not take revenge, my friends, but leave room for God’s wrath, for it is written: “It is mine to avenge; I will repay,”says the Lord. On the contrary: “If your enemy is hungry, feed him; if he is thirsty, give him something to drink. In doing this, you will heap burning coals on his head.”  Do not be overcome by evil, but overcome evil with good.

Everyone must submit himself to the governing authorities, for there is no authority except that which God has established. The authorities that exist have been established by God. Consequently, he who rebels against the authority is rebelling against what God has instituted, and those who do so will bring judgment on themselves. For rulers hold no terror for those who do right, but for those who do wrong. Do you want to be free from fear of the one in authority? Then do what is right and he will commend you. For he is God’s servant to do you good. But if you do wrong, be afraid, for he does not bear the sword for nothing. He is God’s servant, an agent of wrath to bring punishment on the wrongdoer. Therefore, it is necessary to submit to the authorities, not only because of possible punishment but also because of conscience. This is also why you pay taxes, for the authorities are God’s servants, who give their full time to governing. Give everyone what you owe him: If you owe taxes, pay taxes; if revenue, then revenue; if respect, then respect; if honor, then honor.   Owe no one anything, except to love each other, for the one who loves another has fulfilled the law…..Love does no wrong to a neighbor; therefore love is the fulfilling of the law….

“The night is far spent, the day is at hand.  Therefore let us cast off the works of darkness and let us put on the armor of light” (Rom. 13:12).

Christians are called to be the light of the world, not the sword of the LORD.

[Preston Sprinkle, (Ph. D. in NT, University of Aberdeen), best sums this up by the display of these two verses:
Beloved, never avenge yourselves, but leave it to the wrath of God, for it is written, “Vengeance is mine, I will repay, says the Lord.” (Rom 12:19)

For he [the  governing authority] is the servant of God, an avenger who carries out the wrath of God on the wrongdoer. (Rom 13:4)”] {This KEY POINT of Dr. Sprinkle posted in context below in my last comment.}

[Charles Spurgeon is an excellent example of a Christian leader who understood the implications of this. See here ]