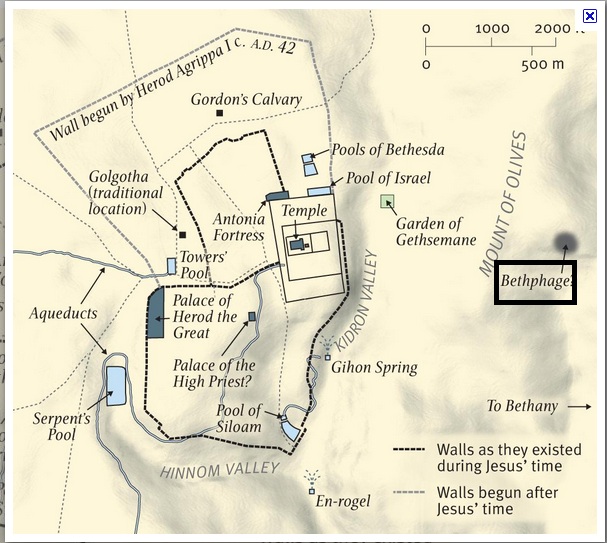 Amidst the joy that begins Holy Week, someone always dredges up an unfounded conjecture [today’s examples here,  here and here] which says, “Apples are oranges.” That is this—that the crowds who shouted, “Hosanna!” were the same crowd that cried, “Crucify him!”

Such an idle charge has no foundation in the text, and bears false witness akin to that at Jesus’ trial. It is like saying that Peter not only denied Jesus, but also joined the mob that called for crucifixion.

We are told that Jesus, “six days before the Passover, came to Bethany where Lazarus was, whom Jesus raised from the dead” (John 12:1).

Jesus, with the once-dead Lazarus, attracted a large crowd (v. 9). The next day, with pilgrims streaming into Jerusalem from every direction, some throngs on the east side who hear of Jesus’ approach, come and join the procession of Jesus and his disciples (remember, Jesus had more than twelve; he once sent out seventy). “As soon as He was approaching…the whole crowd of the disciples began…shouting:
‘BLESSED IS THE KING WHO COMES IN THE NAME OF THE LORD…’” (Luke 19:37f).

(Note: those who had earthly expectations of a King would not have expected fulfillment until after Passover. Israel was freed from bondage following Passover, not before.)

Days later, the chief priests and elders completed their stealthy plot to kill Jesus, but “not during the festival, otherwise a riot might occur among the people” (Matt. 26:5).

Remember, the Teachers of the Law all had their own disciples. A very different entourage accompanied the Jewish leaders as they held their night trial and then proceeded to Pilate’s judgment seat. It was the chief priests and elders, encouraging the crowd that they attracted, who together shouted, “Crucify him!” (Matt. 27:22).

[“The scribes and the Pharisees sit on Moses’ seat,…they love to be greeted with respect in the marketplaces and to be called ‘Rabbi‘ by others.” (Matt. 23)

Every Rabbi/Teacher had his own disciples/learners. The scribes and Pharisees had their own entourage of followers.]

Mt. 21:1 Bethphage (near the east side of Jerusalem)

Mt. 24:45f “Chief Priests and Pharisees…when they sought to lay hands on him, they feared the people.”

Then, “a great multitude with swords and clubs came from the chief priests and elders…”

and “led him away to Caiphas the high priest where the scribes and elders were assembled.”

27:1ff “When morning came…they led him away..to Pilate.” (Luke: “Then the whole multitude of them arose and led Him to Pilate.”)

v. 20f “chief priests and elders persuaded the multitudes that they should ask [Pilate] for Barabas and destroy Jesus…they all said, ‘Let him be crucified.’” Luke: “Crucify Him, crucify Him!“